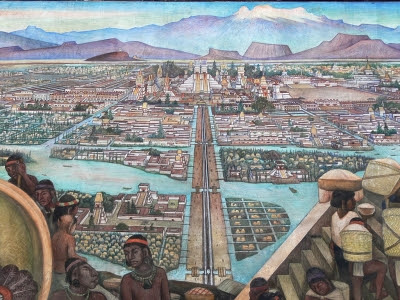 This talk will explore the paradoxical history of water in Mexico City–the constant flooding, the lack of water for daily consumption–and the conditions of possibility that allowed for 22 million inhabitants to reside in a place not suitable for such large numbers.

Ivonne del Valle is an Associate Professor of Colonial Studies. She received her Ph.D. from U.C. Berkeley in 2004, and before returning to the Bay Area in 2009, she taught at the University of Michigan. Her research and teaching make connections between the past and the present which try to show the relevance of the colonial period for an understanding of contemporary times. She was co-director of the Berkeley research group “Mexico and the Rule of Law.” She has written a book and a series of articles on the Jesuits (José de Acosta and Loyola, and Jesuits in the northern borderlands of New Spain) as a particularly influential politico-religious order that served modernization and the expansion of the Spanish empire.

She is currently working on two projects: one on the drainage of the lakes of Mexico City, and the other on the role of the colonization of Spanish America from the 15th century onward in the development of new epistemologies and political theories. In the latter she is exploring the ways in which both the unprecedented violence of conquest and colonization, and the need for effective administration of the colonies, brought about important theoretical, technological, and epistemological changes which may have been conceived to be put in place in the colonies, but which in the long run transformed the way Europe understood and fashioned itself.